Baghouse corrosion is a common problem. It’s caused when the condensing of the gases the at the tops are getting colder than the gases causing acid dew point corrosion. This needs our ceramic thermal barrier Super Therm® and protective lining Rust Grip®.

A baghouse, also known as a baghouse filter, bag filter, or fabric filter is an air pollution control device and dust collector that removes particulates or gas released from commercial processes out of the air. Power plants, steel mills, pharmaceutical producers, food manufacturers, chemical producers and other industrial companies often use baghouses to control emission of air pollutants. Baghouses came into widespread use in the late 1970s after the invention of high-temperature fabrics (for use in the filter media) capable of withstanding temperatures over 177 °C). (Source)

Controlling heat is key to controlling corrosion in air pollution control systems. You can see where the acid enriched moisture just sat there created a film eating away at the metal in the photos below.

Process chemistry can contribute for example if there is a urea system upstream. Or depending in fuel burned mostly Acid dew point! Source: JC Industrial Services (USA). 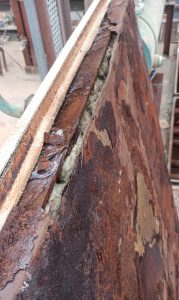 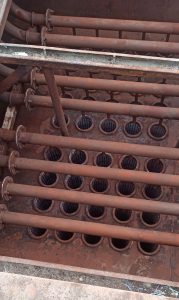