NEOtech Coatings were contacted by Malcolm and Betty from Booleroo Centre in the Southern Flinders Ranges, South Australia to help them solve a major heat issue with their home. The Flinders Ranges as part of the Mid North and Outback region can reach temperatures above 45° in summer and all the roofs are unprotected from the blistering and burning sun

Built in 1882, the galvanised roof was replaced early 2000 but the heat penetration through the roof, bulk insulation and ceiling was unbearable. Malcolm and Betty also have an extension that is a flat roof with no ceiling space which also gets very hot.

Their 24kW solar system performed better with more power back to the grid as the solar panels had their surrounding radiant heat significantly reduced and they required less air conditioning.

Not long after the Super Therm® was applied, Malcolm commented they were able to feel the internal temperature difference. After application on a 28° day, the roof space average was 31° and the Super Therm coated sheets internally were also 31° compared with previous high of 41° on the uncoated roof. This 25% difference means it was much cooler inside their home as there was a tiny amount of heat loading into the roof space and traditional insulation.

In fact, once Super Therm® was applied the roof space stabilised and consistently tracked with the ambient external temperature and reduced their air conditioning needs.

While we still build homes as we did in the 1800s, Super Therm® has proven it blocks the heat load and transforms your home into an energy efficient and future ready building. Naturally dark roofs attract much more heat and are being banned in some parts of Australia, imagine a Super Therm cool roof that blocks most of the heat and pays for itself very quickly.

Malcolm and Betty’s investment will last well over 20 years against the rising threat of heatwaves, blackouts and increased sustained heat events.

As installed, at the time of this testing, the Super Therm® Roof Coating System proved to be an effective Energy Conservation Measure (ECM) that produced a reasonable simple pay back of approximately 2.2 years on this particular project. This would indicate that it’s application could be fundable with Federal and / or State of Florida Energy Grant Dollars where applicable. Note: Results may vary in different conditions and locations.

See the Department of Energy report >

Reduces energy and maintenance costs while increasing comfort in buildings

Going Green and Saving with Super Therm in Las Vegas

Imagine an exterior paint that saves you money. It’s true. It’s called Super Therm® and this ceramic coating has the consistency of a thicker paint, which repels 95% of heat by deflecting three radiation sources from the sun–ultraviolet, visual light and infra red rays.

Super Therm® creates an envelope of heat protection on the outside of a home, translating to not only a cooler house, but saving between 40 to 60 percent on your next power bill. Ron Randazzo has seen 50% reduction on his total utility bill and this includes running his pool and other electrical outlets. Read article – pdf | Read More > 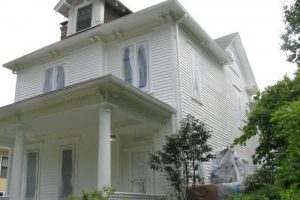 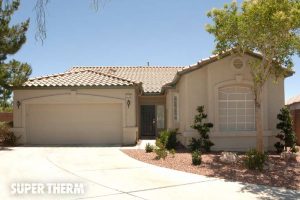 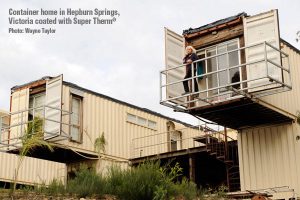 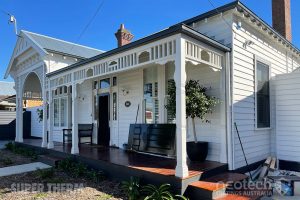 Sound reduction on this Geelong home by an average of 40%. Photo: Suntraders Sustainable Solutions 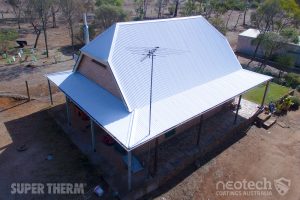 Super Therm applied to a house in Kapunda, South Australia
Schedule a Call
Save 20-50% on energy use (Industry Test) Download PDF!