The three-story Blue Chip Casino located in Michigan City, Indiana, is the largest US Coast Guard approved casino vessel ever built in USA at a cost of construction was budgeted at $163 million.

Just a little history.  The Blue Chip Casino II project began in January 2005 but the painting did not begin until around April 1, 2005.  The opening day is today, January 31, 2005.  The boat is approximately 200′ x 400′ and has four decks.  The Owners are Boyd Gaming, who according to Forbes Magazine, ranks number one in the “Best Managed Companies” Category.

The metal was produced, shipped to the Midwest to be laser cut and then shipped to Michigan City, Indiana to construct the boat. When the metal arrived the potentially rusty surfaces were power-washed at approximately 3,500 psi and then primed with RUST GRIP®. NO SANDBLASTING REQUIRED. Clean the surface and let dry completely before coating with RUST GRIP®.

This is the first of this size and largest Casino Boat built in the world.  All corrosion protection and heat block protection is performed by Superior International II, Inc. Coatings.

The final coating system is:

J.E. explains how the Blue Chip Casino Boat was coated with SPI’s coatings

This is the largest Casino Boat being built in the United States and world.  The progress pictures show only one level of steel constructed at this time which houses the engine rooms, utility and engineering.  The steel was allowed to bloom or flash rust to give the profile we wanted before applying the RUST GRIP.  Flash rust offers an anchoring surface where the RUST GRIP can penetrate and encapsulate the surface and lock down to prevent any breathing of air, moistures or pollutants.

RUST GRIP is sprayed on using an airless sprayer with a 19 – 21 thousandth tip size.  The seams, welds, angles, bolt heads or any addition to the metal plate is brushed to assure a complete encapsulation of the area and to assure no pin holes.

Above water line up the sides will be primed with RUST GRIP for 5 levels and decking.  SUPER THERM will be used as the exterior heat block material with a finish coat of ENAMO GRIP in white and trimmed in the colour of choice.  This offers heat block on the exterior during summer and sun. Interior of ship will be primed with RUST GRIP over all metal surfaces.  SUPER THERM will be used as the interior heat block material from top to bottom covering all metal surface directly exposed to the exterior sides and bottom of ship in the cold water.  This helps to hold heat in and stabilize the temperature inside the ship.  ENAMO GRIP will be used as the overcoat for gloss and toughness.

Problems solved by using the coatings to corrosion protect and block heat on this ship:

1. No white sandblast required before coating the metal after welding.  Saved over 2 million dollars.  Just power washed to remove dirt and residue.  Completely dry then coat.

2. Fiberglass had always allowed condensation to develop and cause corrosion and wet metal skin.  So much water flowed down the sides that catch rails were installed to catch the water running down the interior side of the ship metal skin during winter.

SUPER THERM® completely eliminated this problem and no condensation has ever developed during the winter months after the HVAC system was installed and operating properly.

3. SUPER THERM® provides full heat block over all the metal skin, including the cross beams, support arms, railings, etc.  This provides 100% coverage over all the metal attaching to the exterior cold side.  Reports from the maintenance manager is that the boat is using less fuel to heat the boat than was estimated when the consumption rate was set up for fiberglass.

4. SUPER THERM® is coated on exterior side to prevent the metal during summer months from heating.  SUPER THERM® blocks heat load into the metal which is the most important heat block effect that can be achieved.  Fiberglass, foams and other such materials allow 100% of the heat load to happen, then these materials try to resist or slow down the heat flow to the interior or exterior.

These materials are outdated 20th century insulation materials because they allow heat load.  SUPER THERM® is the 21st century heat block material that blocks the heat load from happening into the surface of the substrate.  If the surface cannot load heat, there is no heat to transfer through.  Instead of having an “R” rating which allows for full heat load, SUPER THERM® measures “emissivity” (0.05) which equals absorption of heat.  The lower the emissivity, the lower the heat absorption.  At the same time, a measurement of how fast the surface heat is thrown off is measured by emissivity which SUPER THERM® tested to 0.90 with 1.0 being the best to throw off any heat that is loaded into the surface. 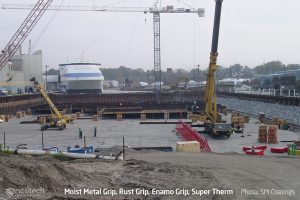 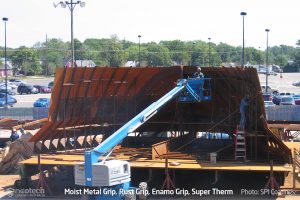 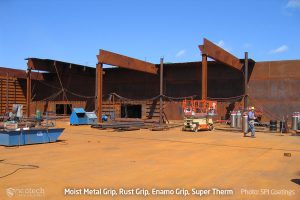 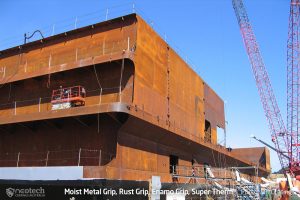 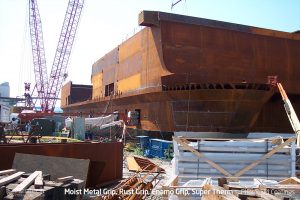 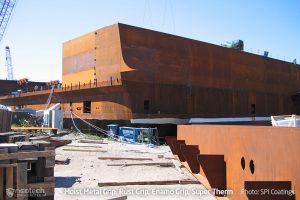 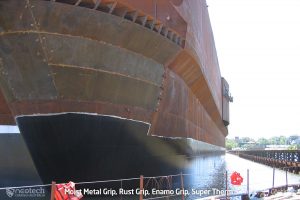 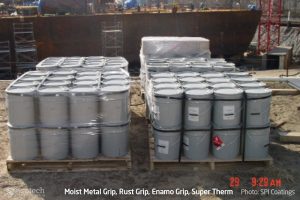 Pails of Rust Grip® on the Blue Chip Casino Boat 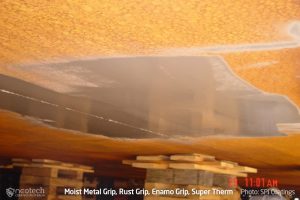 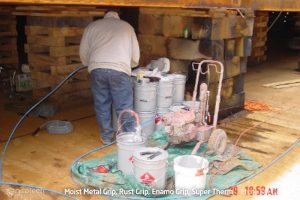 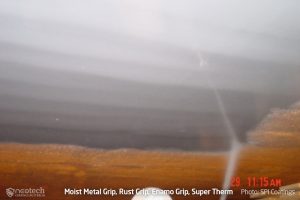 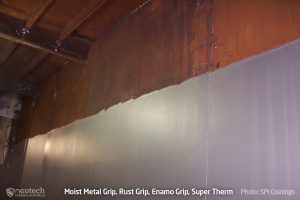 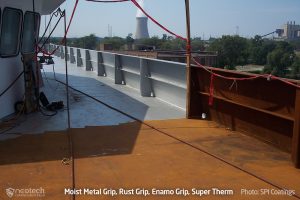 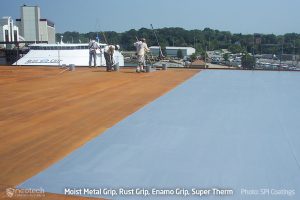 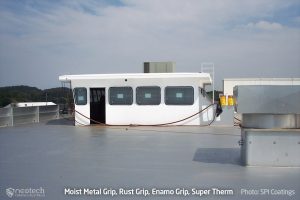 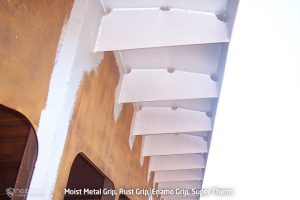 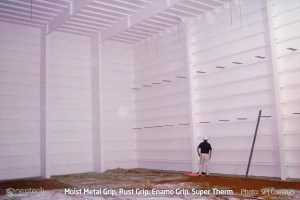 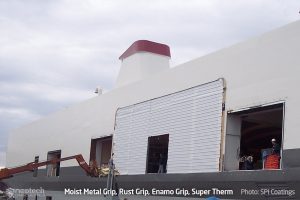 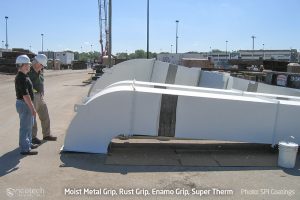 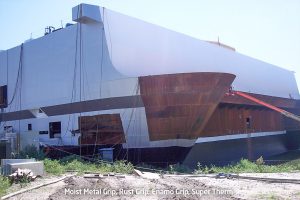 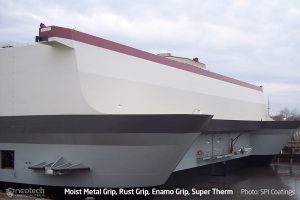