The client was seeking a coating system which was both surface tolerant and fast drying. The underground metro system was cast iron steel, which could not be shutdown or abrasive blasted since it was in operation 365 days a year. After extensive testing by head of Baku Metropolitan Tunnel Authority, Rust Grip® was sole specified and painted every night from 1am to 5am when the train system was offline.

In order to stop further damage by severe corrosion to the metal underground structure of the Metro in Baku, a first test project was set up by Superior Products Caspian during first week of April 2014.

The purpose of this pilot test application was to verify the durability and corrosion encapsulation ability of Rust Grip® on non-sandblasted heavy corroded dry metal parts in the underground tunnel complex.
Therefore one section, nr.PK 27+33+34, was selected by the Metro.

Rust Grip® was applied in 2 layers at average of 250μ DFT on the test patch. Evaluation was made after full curing adhesion and scratch tests. The Metro responsible engineers were pleased with the highly satisfactory results. Full description of this demo application is available upon request.

End of June 2014, decision was made by Mr. Zaur Mir Tofiq oglu Hüseynovun, the Chairman from the Baku Metro, after meeting and discussions with J.E. Pritchett, President of Superior Products International II, to continue further applications in the Metro. Contract was concluded between Baku Metropolitan and Superior Products International II to start this encapsulation project with purchase of three 20 foot containers Rust Grip® (2660 gallon each). Superior Products Caspian, in coordination with Superior Products Europe, started organizing the purchase of all the necessary materials and equipment in order to carry out this work properly and in safe conditions. In September 2014 the first 20 foot container with 2660 gallon Rust Grip® arrived in Baku.

First application training was held between 12 December 2014 till 19 December 2014 under supervision of Superior Products Europe. Purpose was to give training and understanding how Rust Grip® must be applied; and to assure that the coating system fully encapsulate all corrosion on dry and sound parts.

Before the end of 2015, the 3rd container is supposed to arrive for having continuity in the applications.

In 5 nights, over 604 m2 of heavily rusted cast iron steel was encapsulated with Rust Grip®. Download the full report. 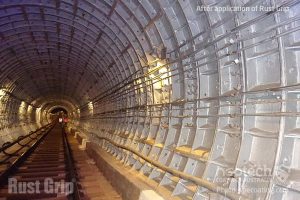